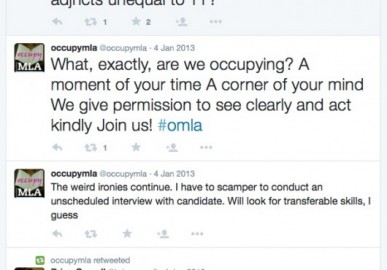 Over the course of 15 months, Marino and Wittig wrote over 3000 tweets in a netprov satirizing the adjunctification of higher education while telling the story of 3 adjuncts lashing out against the institutions that gave and then destroyed their dream of tenure track jobs, teaching the literature that they love.

The Twamatis Personae and the Story Arcs

In both years, the bulk of @occupymla Tweets consisted of encouraging slogans related to adjunct issues and reTweets of, or links to, others writing well about them. The slogans, however, grew from the particular moment’s drama of these three characters.

In 2011, Occupy MLA’s original tagline for the account — “Take hold of your alt-ac job advice & place it squarely in your variorum. TENURE TRACK NOW” — drew Charles into a tussle with the burgeoning altac community. Mark and Rob are ardent supporters of  #altac paths but wanted our characters to perform the profound emotional disappointment of an age when tenure seems to be an endangered species and in which degree-granting institutions are certifying far more PhDs than the specific market can bear.

Hazel exulted over an interview appointment at the 2012 meeting of the Modern Language Association (MLA12). Many followed her as she bought a tailored suit wildly above her price range just for the opportunity. Charles’ pride and jealousy drove him to expose Hazel’s identity as a member of Occupy MLA, costing her the interview. John abandoned academia altogether for a job copy-writing, then cooking at a hip restaurant. Charles would go on to lose his own adjunct job as well as his family. Administrative had disrupted their coalition. Occupy MLA unraveled.

In 2012 the untimely demise of a professor at his old institution recalled John to academia on favorable terms. Given the safety net of the restaurant job, John exuberantly re-opened the @occupymla account. Charles objected, then joined. Occupy MLA developed a website to articulate their platform (http://occupymla.tumblr.com/). Hazel was led on by #profdarcy, who then passed her over for an interview on a permanent position, in the wake of which she, too rejoined the movement. Charles tried desperately to get his family back while working in a job marking papers for a course at a for-profit, online university. John celebrated the irony of being asked — he, an emergency substitute adjunct — to go to MLA13 in Boston to conduct interviews. The piece continued right into the time of the MLA13 convention, offering the powers-that-be a penny for their thoughts on the adjunct situation, asking sympathizers to put a penny in their convention badges to show solidarity, and drumming the refrain “Join us!”

Where to Find "Occupy MLA"

Read about Occupy MLA in the Chronicle of Higher Education

Read the full set of tweets

A long form netprov that lasted for over a year, Occupy MLA sought to promote discussion of the issues of non-tenure-track faculty (such as my co-author Mark C. Marino and myself) in the heart of the mighty Modern Language Association and its yearly convention. We created characters who we felt represented the plight of NTT faculty in a realistic and relatable way, and we used the cover of anonymity in part because we feel as vulnerable as so many of our NTT sisters and brothers do.

When Mark revealed it to be a work of electronic literature at the MLA conference in January  of 2013, it unleashed a lively firestorm of attacks and defenses of our artistic strategy, reminding us of the bewildered and angry reaction to the introduction of other forms of fiction in the long history of literature. 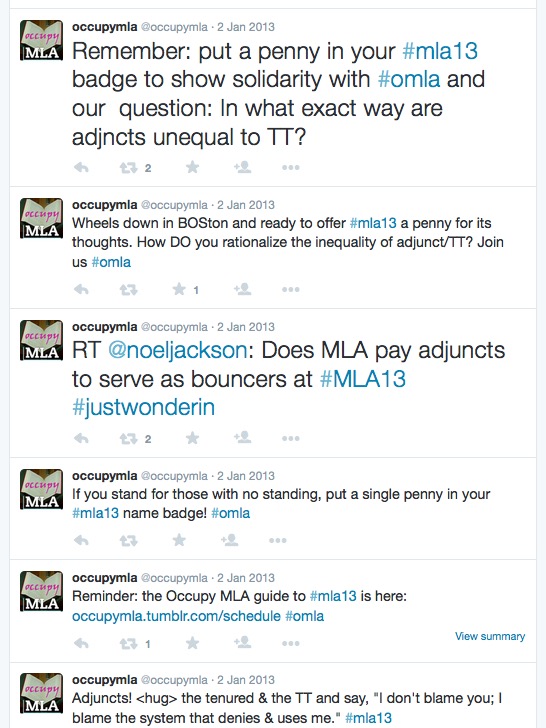